Nothing on this page should be taken as legal advice.
Please read my Disclaimer page for further details.
If you would like legal advice or just want to chat about this post, please do not hesitate to contact me.
In my first post on the Indian Act in BC, I discussed the time period from 1871, when BC joined Canada as its sixth province, to 1876, when Canada enacted the Indian Act.

In this post, I review the period during and after 1876, when BC's "exceptionalism" with respect to the Indian Act continued. I am also sharing a deep, dark, lawyerly secret: I have a favourite Order-in-Council.

It's certainly not for what is in the OIC; it is how it is numbered.

Before we get to that OIC, however, we have to back up a bit to the time before the Indian Act, 1876 came into force in April of that year.

By the end of 1875, Canada and BC were nearing the end of a contentious, multi-year negotiation about how they would fulfill the terms of Article 13 of the BC Terms of Union, the 1871 agreement by which BC became a part of Canada. At issue was the provision intended to determine how the two governments would create Indian reserves in the new province:

(In my first post in this series, I reviewed an 1874 letter from the Dominion Minister of the Interior and Superintendent General of Indian Affairs in which he expressed the view that this Article meant that all colonial Indian reserves had been transferred to the Dominion and were now under Dominion control, an outcome with which the Supreme Court of Canada, more than 100 years later, would disagree.)

As it turned out, BC and Canada came to understand that they had very different visions of how Article 13 should be implemented.

Finally, on 10 November 1875, Canada passed an Order-in-Council, PC 1875-1088, in which it agreed generally with most of the recommendations tabled earlier by BC's Attorney General (and adopted by BC in an Order-in-Council). However, "with a view to the speedy and final adjustment of the Indian Reserve question in British Columbia on a satisfactory basis," rather than giving the job of recommending Indian reserves to an Indian agent, Canada's OIC established a three-man commission, later known as the Joint Indian Reserve Commission. The JIRC's mission was, "after fully enquiry on the spot, into all matters affecting the question, to fix and determine for each nation separately the number, extent and locality of the Reserve or Reserves to be allowed to it."

A few months later, British Columbia agreed to this method of proceeding, as outlined in more detail in Canada's OIC.

By August 1876, the two governments had appointed all three Indian reserve commissioners: Alexander Anderson, for the Dominion; Archibald McKinlay, for the Province; and Gilbert Sproat, the joint appointee. The three met for the first time on August 25 to begin planning their route and their procedures and making the necessary arrangements.

At the end of October, BC wrote to Canada to complain about what it saw as an inconsistency between the two sets of instructions when it came to the commissioners' reducing the size of existing Indian reserves, something they had apparent authority to do (though, in practice, did infrequently or not at all):

The Government desires to call the immediate and earnest attention of that of the Dominion to a discrepancy existing between the clauses 5 and 6 of the agreement arrived at between the two Governments, for the settlement of the Indian Reserve Question and the instructions which if carried out would tend to render nugatory the entire agreement and the efforts of the Commissioners.

6. That so soon as the Reserve or Reserves for any Indian nation shall have been fixed and determined by the Commissioners as aforesaid, the existing Reserves belonging to such Nation, so far as they are not in whole or in part included in such new Reserve or Reserves so determined by the Commissioners, shall be surrendered by the Dominion to the Local Government so soon as may be convenient, on the latter paying to the former, for the benefit of the Indians, such compensation for any clearings or improvements made on any Reserve so surrendered by the Dominion and accepted by the Province, as may be thought reasonable by the Commissioners aforesaid.]

while the [Dominion] Memorandum to the Commissioners has the following paragraph bearing reference to those clauses.

"With respect to that part of Clauses 5 and 6 (agreed upon by the two Governments, relating to the diminution or surrender of Reserves once granted to the Indians, you must bear in mind and have it clearly understood ab initio that these clauses must be read by the light of the provisions of the 31 Victoria Chapter 42 extended and made applicable to British Columbia by the 37 Victoria Chapter 21 and reenacted in effect by the Indian Act of last Session [the Indian Act, 1876] whereby it is provided distinctly that no part of any Indian Reserve once appropriated can be surrendered or alienated without the sanction of the Indians to whom it has been assigned."

Clauses 5 and 6 of the agreement formally come to between the two Governments give the Commissioners full powers to enlarge or diminish the Reserves, but the Memorandum of Instructions dated more than 10 months after the agreement in a short sentence at once places it out of the power of the Commissioners to deal with the question of diminution and surrender of Reserves without the most formal and complicated assent of the Natives concerned and a consequent liquidation of their claims for compensation however enormous they might prove.

The injustices to British Columbia of such a restriction and its utter impracticability need hardly be dwelt upon for while the Commissioners have no restrictions placed upon them as to increasing Reserves already made, which may have to be done at an enormous sacrifice of land and money, yet the moment they proceed to cut down or do away with a Reserve or any portion thereof (however palpably large or unnecessary) their endeavours will be met by the provisions of the Indian Act which allows of claims for compensation to be made utterly beyond the means of B Columbia and such as would even startle the Dominion Government.

The Government of British Columbia therefore earnestly hope that this question may at once meet with the gravest consideration of that of the Dominion, with a view to relief being afforded by an early enactment repealing such portions of the Indian Act as may conflict with the agreement between the two Governments failing which they anticipate an entire failure of any results from the appointment of the Commission.

Awaiting the result of this application this Government has instructed the Commissioners in their initial proceedings not to deal with any Reserves where a surrender or diminution may be in question.

In a nutshell, the Dominion had instructed its two commissioners that if, in the course of their reserve  allotments, they decided to reduce the size of an existing Indian reserve, then the provisions of the Indian Act relating to surrenders - importantly, requiring the band's consent - applied. The Province objected strongly to the Indian Act requirement to obtain Indigenous consent to reducing their reserves and to the possibility of the Crown's owing compensation to any community whose existing reserve was reduced.

And so it came to pass that, just over a year after Canada passed PC 1875-1088, structuring the Joint Indian Reserve Commission, Canada passed Order-in-Council PC 1876-1088, exempting ALL British Columbia "Reserves and Indian Lands" from the Indian Act:

In accordance with the suggestions contained in the annexed memorandum of the Deputy of the Minister of the Interior, and on the recommendation of the Hon. Mr. Scott acting in the absence of the Minister of the Interior the Committee advise that the Reserves and Indian Lands in British Columbia be exempted from the operation of all the clauses of the "Act to amend and consolidate the laws respecting Indians" which in any way relate to or affect Indian Reserves in British Columbia and that a proclamation be immediately issued declaring such exemption.
​

(Although I don't know for sure, I have to think that Canada's designation of this OIC by the same number - 1088 - as the 1875 OIC was not just coincidence.)

In what can only be described as a "whoopsie!", three weeks later - no doubt after someone recognized the mistake - Canada passed another OIC, PC 1876-10881/2, providing this:

... the Committee advise that the Reserves and Indian Lands in British Columbia be by Proclamation under the provisions of the 9th Section of "The Indian Act, 1876," exempted from the operation of Sections 25, 26, 27, and 28 of that Act, and that the Minute in Council of 21st of November late be cancelled.
​

Sections 25-28 of the Indian Act, 1876  were what are known as the "surrender provisions", requiring Indian band consent to the surrender of an Indian reserve:
​ 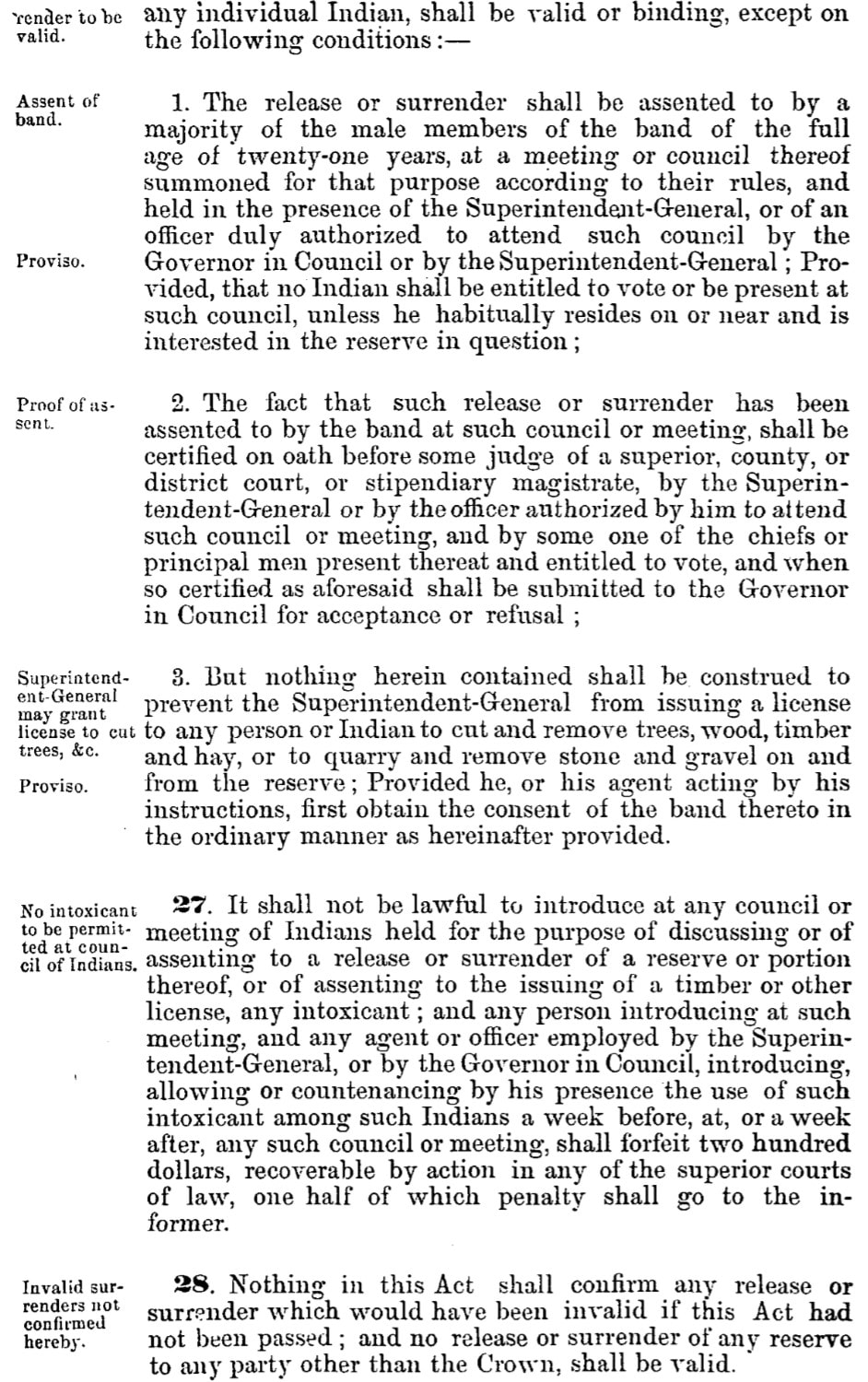 Having passed the "Whoopsie!" OIC, it is clear that Canada was attempting to meet BC's demands from October 1876 - although to what extent it fully met those demands is debatable.

I am not aware that this OIC was ever formally rescinded or otherwise terminated. So, did it cease to have effect
Justice Binnie, for the court in Wewaykum, appears to have concluded that the OIC was still in force in 1907:

Counsel for Cape Mudge argues that the 1907 Resolution is invalid for non-compliance with the surrender provisions of the Indian Act but (i) I do not think resolution of a “difference of opinion” between sister bands of the same First Nation to which the land had been allocated in the first instance should be characterized as a surrender, (ii) the land designated as Reserve No. 11 was not an Indian Reserve within the meaning of the Indian Act in 1907; it was still provincial Crown property, and (iii) in any event the operation of the surrender provisions of the Indian Act had been suspended (to the extent they were capable of application) by Proclamation of the Privy Council made December 15, 1876 (The Canada Gazette, December 30, 1876, vol. X, No. 27).

Returning to the aside: The question of Indian reserves


All to say, I may have to draft a Part 3 of this series on the applicability of the Indian Act​ in British Columbia at some point...