Nothing on this page should be taken as legal advice.
Please read my Disclaimer page for further details.
If you would like legal advice or just want to chat about this post, please do not hesitate to contact me.
This is the second in a three-part series about Indigenous/settler conflict over land in the summer of 1877 in the Shuswap and Okanagan valleys. Part one described Indigenous peoples’ anger over the occupation of their lands and the Indian reserve commissioners’ response. Part three will discuss the trade-off that Canada made that summer, not to press the province to negotiate with Indigenous peoples in BC to extinguish their Indian (Aboriginal) title, if the reserve commissioners could appease them by the allotment of comparatively generous Indian reserves.

This post focusses on one historical curiosity I discovered about that summer: the federal Indian reserve commissioners’ communications with Ottawa by a telegram “in cypher”. I described the circumstances that led to the telegram and laid it out in its entirety (also reproduced below) in my first post in this series. Here, I provide the full original copies of the telegram, with both the cyphered and uncyphered text, as well the cyphered telegram in reply. I have not been able to find the key - possibly called "Slater's key" - that deciphers the cypher. Can you figure it out?

As described in my first post of this series, the federal Indian reserve commissioners wrote this dispatch (for a telegram), in Kamloops, on the night of July 13, 1877:
​
They dispatched their telegram to Cache Creek, some 80 kilometres away, likely with an Indigenous man on a horse (as they did later). Cache Creek was the nearest place from which a telegram could be sent.

The telegram sent on July 16 was "in cypher," as the commissioners put it. The copy below is the original, as it was received in Ottawa and then deciphered (according to the words written in above the cyphered words): 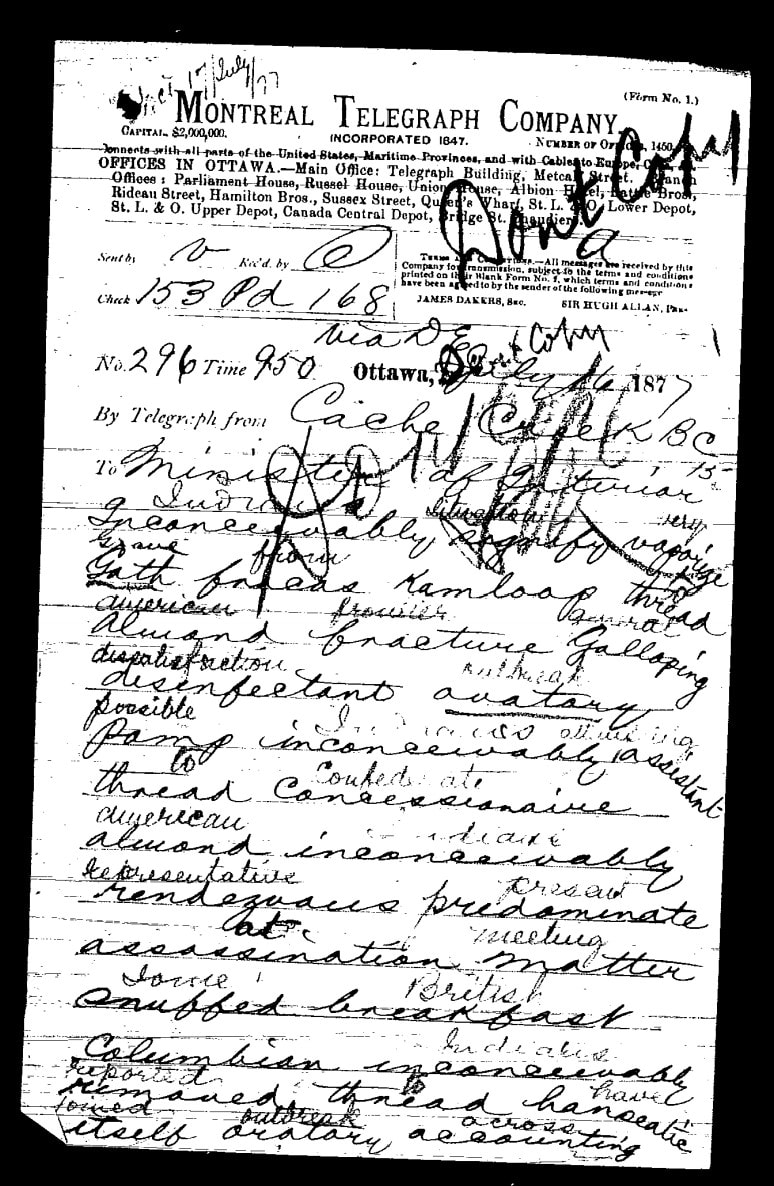 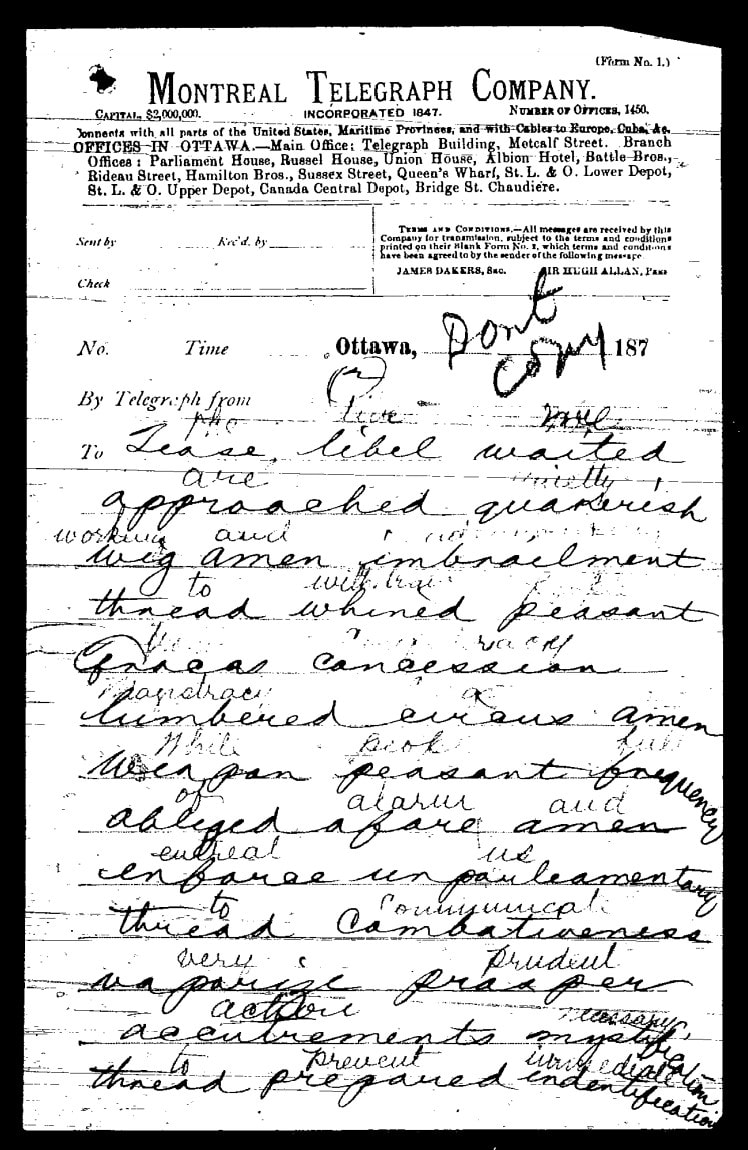 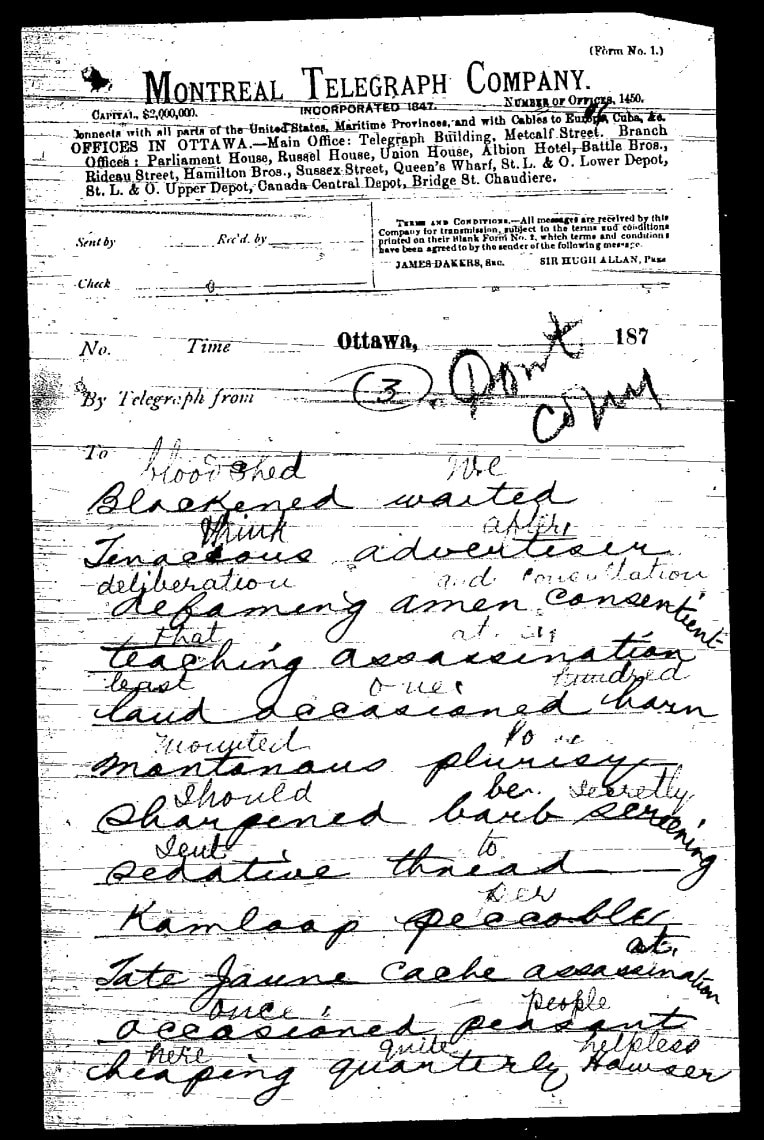 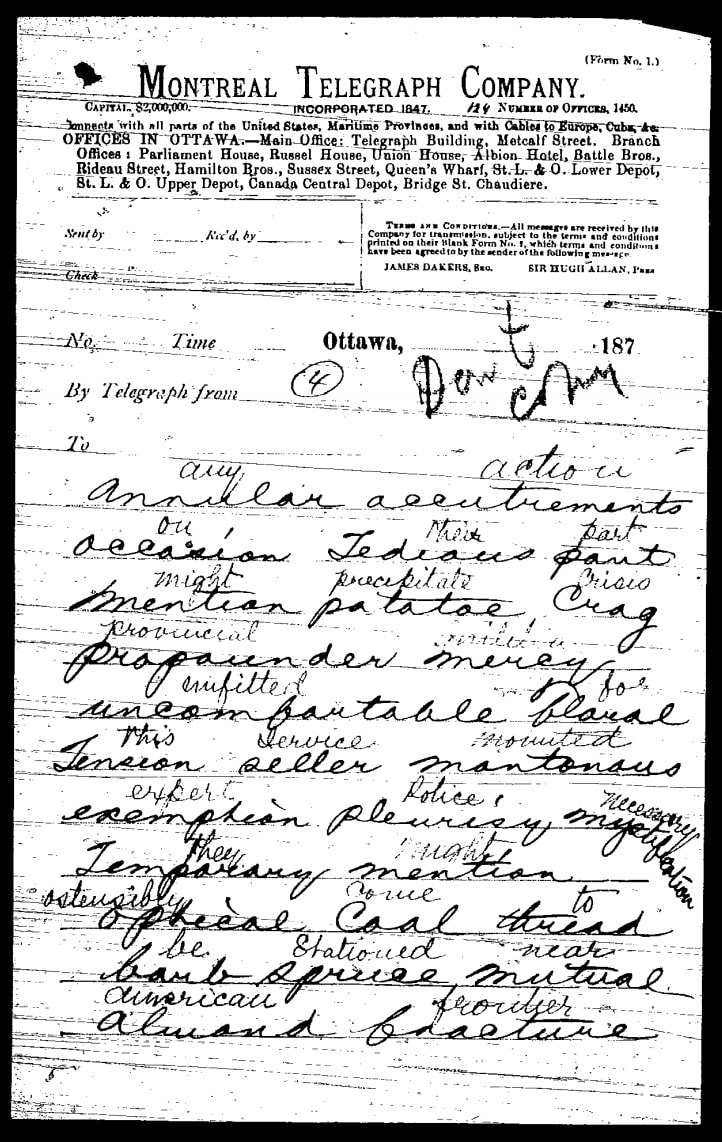 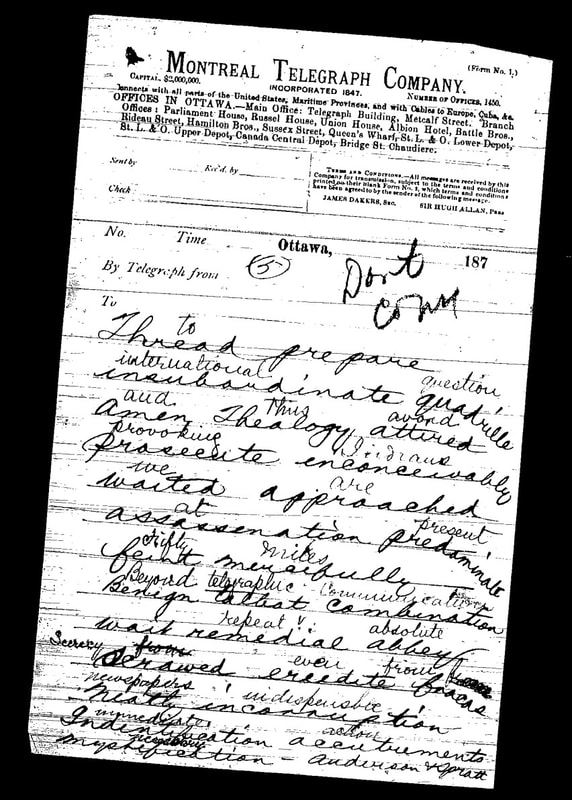 Click on images to enlarge.
I also have a copy of both the original script for telegram that the commissioners wrote and dispatched to Cache Creek, in both the deciphered and cyphered versions. They are a little easier to work with:
​
As you can see,

So, the first letters of each word are common between the cyphered and deciphered versions.

As well, "Inconceivably" seems to be used repeatedly for "Indian," and "almond" for "American," suggesting that the cypher's key may be like a cross-language dictionary, where one word always​ stands in for another.

Beyond that, I'm not sure that the code is "crackable". What do you think?

The commissioners left Kamloops on July 22, deferring their reserve allotments for Tk’emlúps a second time. They went west to Savona's Ferry (present-day Savona, on the west end of Kamloops Lake) to meet with Skeetchestn.

I do not have a copy of the actual telegram, only a transcription of it. First, here is the text of the telegram in cypher:
​ 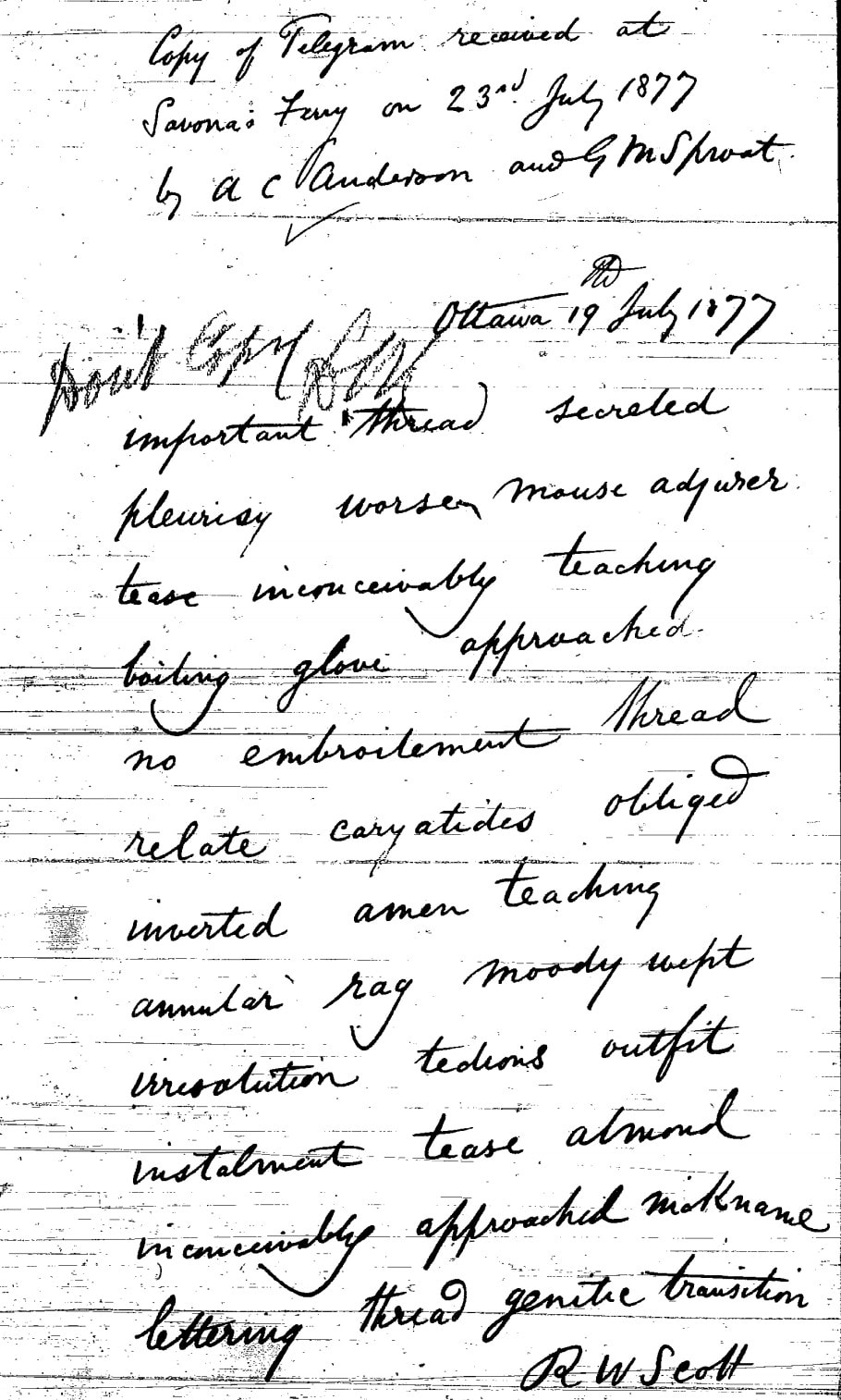 And here is the telegram, deciphered -- by Sproat and Anderson (on the left) and another version, possibly that in Scott's files:
​
I have heard of other Canadian federal officials communicating in cypher elsewhere in Canada in the context of "Indian affairs" in this time period. However, I do not know how widespread this practice was; how long it lasted; or, indeed, if Canada used the cypher to communicate in other contexts.
In my next post, I will discuss Canada's position with respect to Indian (Aboriginal) title, as expressed by the Minister of the Interior & Superintendent General of Indian Affairs, David Mills, in his 3 August 1877 letter. Among other things, Mills acknowledged that since the British North America Act (what we now know as the Constitution Act, 1867) placed "Indians, and Lands reserved for the Indians" under Dominion control, the Dominion had “the legal right to interfere and prevent the Provincial Government from dealing with any public land the Indian title to which has not been extinguished, and they have the right, also, as such guardians, to be present at any negotiation which takes place between the Indian population and the Provincial authorities in order that Indian interests may be adequately protected.”

Joint Indian Reserve Commission, “Journal of the Proceedings of the Commission for the settlement of the Indian Reserves in the Province of British Columbia, continued from Vol. 1”, Ottawa, LAC (RG 10, vol. 1284, reel 13902), Victoria, B.C. Archives (GR-1965).