Role of Aboriginal title in the JIRC's proceedings

Nothing on this page should be taken as legal advice.
Please read my Disclaimer page for further details.
If you would like legal advice or just want to chat about this post, please do not hesitate to contact me.
This is the third in my series about federal and provincial Indian reserve commissioners in the Shuswap and Okanagan in the Summer of 1877. Part one described the Joint Indian Reserve commissioners’ perception of Indigenous anger over the occupation of their lands and the commissioners’ response. Part two focussed on telegrams sent in cypher.

This post discusses August 1877 correspondence that David Mills, Canada's Minister of the Interior and Superintendent of Indian Affairs, sent to various players in the Indian Reserve Commission process. His correspondence exemplifies how significant a factor unextinguished Aboriginal title still was in Canada's and the reserve commissioners' considerations, contrary to the conventional understanding that Aboriginal title no longer played a role in this process.

Who was David Mills?

David Mills was an Ontario politician first elected in 1867 as a federal opposition Member of Parliament. He held his seat until 1882, and then again from 1884 to 1896. The opposition Liberals (along with Mills) formed government in 1873 and governed until 1878, when Sir John A. Macdonald and the Conservatives regained power.

Mills became the Minister of the Interior in 1876; by statutory  direction, he was also thereby the Superintendent General of Indian Affairs, the most senior federal official responsible for “Indian” matters. He held both positions until 1878. During the summer of 1877, the federal Indian reserve commissioners - Alexander Anderson, appointed by Canada, and Gilbert Sproat, jointly-appointed by Canada and BC - communicated extensively with Mills. It is Mills’s reply to a long letter Sproat sent on July 16 that is the focus of this post.

History of (un)acknowledgement of Aboriginal title
​in British Columbia

Much has been written about the failures of the Colonies of Vancouver Island and of British Columbia, and then the Province, to acknowledge and negotiate for the surrender of Indigenous peoples’ Aboriginal title. More needs to be. But as a quick introduction to the 1877 letter from Mills, I have provided a whirlwind synopsis of the situation here.

The fourteen 1850s Vancouver Island treaties, historically known as the Douglas Treaties but more recently as the Vancouver Island Treaties, were actually agreements entered into by the Hudson’s Bay Company with Indigenous groups, kept in a book entitled, “Register of Land Purchases from Indians.” Between the 1850s and 1899, when Canada entered into Treaty 8 (encompassing the north-east corner of the province), the Crown did not enter into any treaties with Indigenous peoples in British Columbia. Up until 1864, the Colony of Vancouver Island was contemplating such treaties, but this ended after Governor Douglas retired that year. Indeed, in October 1872, the former colonial Chief Commissioner of Lands & Works, Joseph Trutch - by then the newly-appointed federal Lieutenant-Governor for BC - explained BC’s history to the new Prime Minister, Sir John A. Macdonald, in this way:

​As I referenced in an earlier post, British Columbia was in a very different position than other parts of Canada with respect to the negotiation with Indigenous peoples of land-related treaties. By 1876, then, BC and Canada had established the Joint Indian Reserve Commission, charged with establishing Indian reserves throughout the province, without reference to Aboriginal title.

In other parts of Canada, however, Canada had been negotiating treaties with Indigenous peoples for the extinguishment of their Aboriginal title to lands. Beginning with Treaty 1 concluded in 1871, and continuing to Treaty 6 concluded in 1876, these treaties all opened with a “cede, release, and surrender” clause, here in the words of Treaty 6: ​
​
With the conclusion of Treaty 6 in the summer of 1876, Canada continued west, to the southern part of what is now Alberta, to negotiate with Indigenous peoples in relation to Treaty 7. These negotiations took place in September 1877.
​ 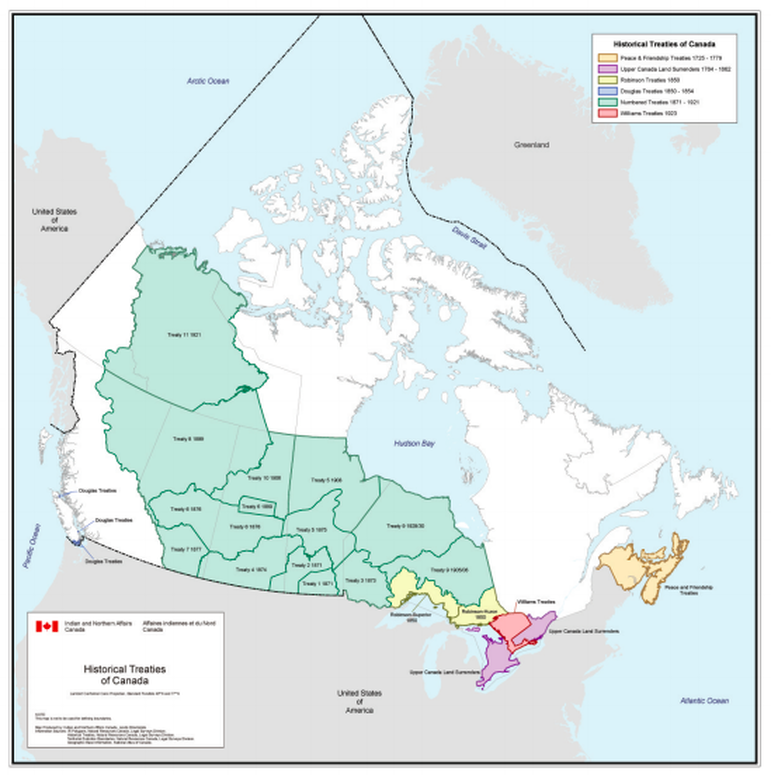 Map of numbered treaties in Canada

While at Kamloops on July 16, 1877, Gilbert Sproat, the jointly-appointed Indian reserve commissioner, wrote a long letter to Mills in which he described the Secwépemc and Syilx confederation and the possibility that the commissioners might succeed in breaking it up. Sproat also reviewed the state of land matters generally in the B.C. interior and provided further justification for the commissioners' request of the Dominion to send the North West Mounted Police. (I discussed this situation in more detail in my first post of this series.) It was to this letter that Mills responded, as the Minister of the Interior, on August 3, in one of the most important pieces of correspondence of Sproat’s tenure as reserve commissioner (1876-1880).

Sproat received Mills’s August 3 letter on August 30, while the commissioners were at the head of Okanagan Lake. In his letter, Mills expressed the Dominion position concerning Indian title in a way that no other federal official had done before. It encapsulated how the Dominion could reconcile its extensive, multi-year treaty negotiation efforts to extinguish Indian title in the areas east of the Rocky Mountains with the lack of such a pursuit in British Columbia. The Dominion’s lack of ownership or control over the land of the province, as it had in the territories between the Rockies and Ontario, was an apparent fundamental factor underlying the difference in Dominion position.

Mills blamed Indigenous discontent on the province’s policy “that the Indians have no rights in the soil to extinguish,” a policy “wholly at variance with that which has been hitherto pursued by the Crown in dealing with the aboriginal population of this Continent.” After recounting British recognition of Indian title in North America, Mills asserted that “British Columbia is the only one [of the former colonies] which has undertaken to deal with the Territory without the Indian title having first been extinguished by treaties with the different native tribes.”

Mills then turned to the Dominion’s authority and role with respect to Indian title in the province. He declared that since the British North America Act placed Indians and lands reserved for the Indians under Dominion control, the Dominion had
​No agreement between the Dominion and the province – and he here referred explicitly to the British Columbia Terms of Union – “could affect the right which in this particular the Crown has always recognized the Indian population as having in the soil.” He further asserted that the Dominion could “neither divest itself of its authority [under the British North America Act] nor take away the just claim of the Indian population by failing to question the assumption of the Province to the absolute property of the soil.”

​Yet, despite this last assertion, Mills told Sproat:
​Thus, to avoid an “Indian war,” Mills urged the commissioners “the propriety of meeting every reasonable demand on the part of the Indians, both as to the extent and locality of their Reservations.” He pointed out that since the Secwépemc and the Syilx had to now become stock-farmers, the commissioners must allot them reserves that were no less in size than what the “white population” could obtain. Further, British Columbia’s Indigenous peoples would not receive the “considerable annuities for the extinguishment of their Title to lands placed at the disposal of the Government for occupation and settlement” that the communities east of the Rockies received, and the province was not going to be required to “pay anything for the extinguishment of Indian claims.” As a result, Mills urged that it was “therefore of all the more consequence in a country so extensive, containing so small a white and so large an Indian population that the Indians should not be made dangerous and discontented by being cooped up on small reservations.”

Mills concluded his letter by observing that, “[i]t is only by doing justice that peace can be maintained and friendly relations continued between the two populations of that distant Province, and the white people and the Government of British Columbia have it in their power to obtain the most perfect security for their lives and their property, by agreeing to what is but a small measure of justice to the Indian population.”

Ultimately, of course, the Dominion did not intervene and require the Province to negotiate treaties with Indigenous peoples for the cession of their lands. But it is extraordinarily (legally) interesting how fundamental a role unextinguished Aboriginal title played at this late date in BC Indigenous land history, given that the JIRC had been explicitly established without reference to Aboriginal title and BC had for many decades disregarded its existence and legal relevance.
​If you are interested in the back-and-forth that ensued, and how Aboriginal title continued to play a role in the work of the JIRC, I discuss it in more detail in chapter 5 of my LL.M. thesis.)